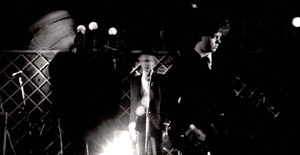 Minny Pops' association with the legendary Manchester label would see them produced by Martin Hannett, tour with Joy Division and later New Order, and become the first Dutch group to record a Peel Session. Singles including Dolphin's Spurt, Secret Story and Time were followed by the acclaimed album Sparks in a Dark Room in 1982.

The band released two further albums (Poste Restante and Fourth Floor) before splitting in 1985. A concert at the Paradiso in Amsterdam on 24 December 1981 would prove to be their last live performance as Minny Pops ...

... until 2012, when a series of gigs were undertaken in the UK, the Netherlands and Belgium. Also that year, Minny Pops recorded a 7" single 'Glistering' / 'Waiting For This To Happen' for Tim Burgess's O Genesis label.

After a pause to draw breath, 2014 saw Minny Pops performing live once again.